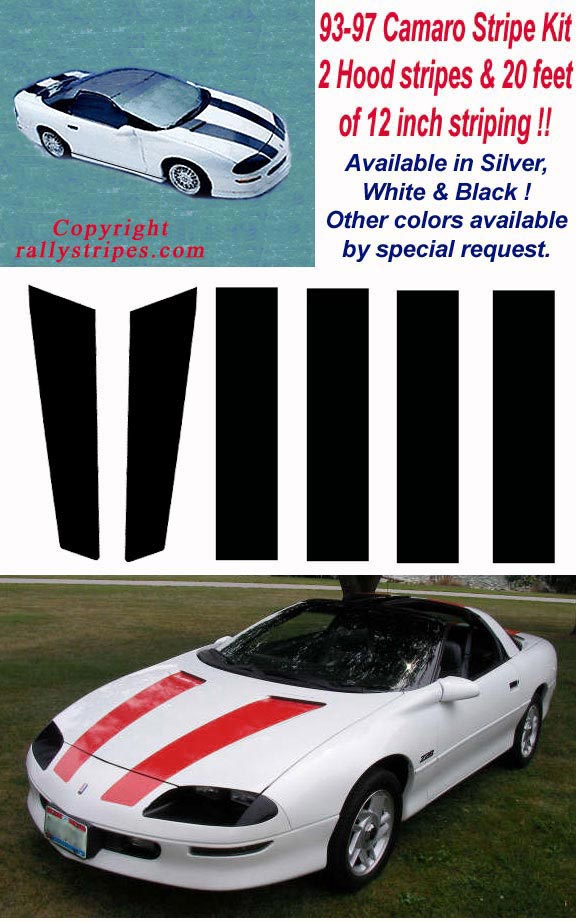 The 1993 – 1997  Camaro is the first phase of what is known as the Fourth Generation Camaro with the second phase being the 1998 – 2002 model. This model has the hood with the indentions in it which limit the type of stripes that can be used.  We have a specially designed precut kit that includes tapered stripes that fit into these indentions as well as 20 additional feet of 12″ striping that can be used for the roof and rear of the car.

On this model you can also use dual 6″ stripes and run them between the scoops down the center of the car.  Adding pinstripes to the two 6″ stripes would make them look wider if that is the effect you are wanting.  To apply dual straight stripes you would run a 1″ piece of masking tape front to back and then use that as a guide.  Our 6″ striping can be applied wet using a mild soapy water solution.  This makes installation much easier.  Pinstripes are generally installed dry.

Pictures of the Camaro above provided by Steven Hendrickson.

The image below shows the 6 inch stripe kits that will fit between the scoops of the 1993 – 1997 Camaro.